Hello blog, it’s been a while. I know I’ve been neglecting you. But it’s not because I haven’t been thinking about you. It’s just that I’m trying to live up to your expectations and it’s not easy. I promise I’ve changed though. No empty promises this time. Action!

I met up with my cousin last week and we both complained to each other about how we hated our jobs and both of us resolved to quit our jobs within 6 months. That means July 2010. Yes. And we’re not blindly quitting. We will have something lined up that pays us too (yay money). The good thing is I’m working on a few possible career options which brings me to my first time working as a stylist for a photoshoot!

It was non-paying (of course), but it’s going to be published so I’m super excited about that. I took a 6 week introduction to fashion styling at FIT last fall, and met Renate who owns a clothing rental studio. She referred me to her friend Peter, who is a photographer. And last weekend we trekked around Times Square shooting. I stopped by Renate’s studio around 11am and picked out a bunch of outfits, including shoes, dresses, trench coats, hats, umbrellas, shirts, and sunglasses. Renate had to remind me about socks. She made a list of everything I borrowed and packed it up. The resulting 2 bags were so huge that I could not possibly carry them more than a a few steps. I wound up taking a taxi to the hair and makeup studio in Chelsea. There, I met the models and photographer. We had to take a cab because we had among 4 people – 3 rolling suitcases ( 2 with photographer’s equipment and one with the model’s clothing) plus my 2 huge bags, and 2 backpacks to Times Square.

And that was where the magic happened. Of course this magic attracted many tourists and curious bystanders. I felt quasi celebrity-like. People stopped and asked me if there was anyone famous in the shoot. One woman even asked me for advice on how her muscular nephew could become a model. I should have taken photos of the swarm of people snapping pictures of the photoshoot. Here are some shots I took of the photgrapher shooting. They’re are a bit fuzzy since I was far away guarding the camera equipment. I picked out the burgundy dress, trenchcoat, and umbrella 🙂 By the time we were done at 6p, I was exhausted but at the same time energized and really looking forward to styling again. 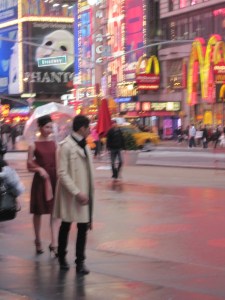 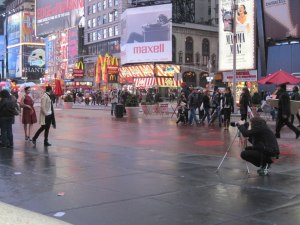 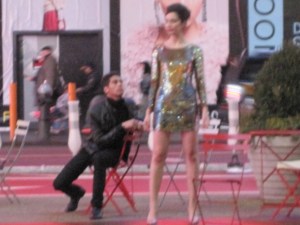 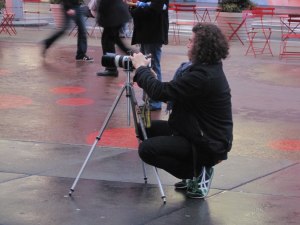