Last night I attended the opening exhibit for Tetsuo Hasegawa at Ward 111 in Tribeca. His work was a series of faces that evoked intense emotion. On one side of the room hung dark and morbid faces that were skeletal and nightmarish, painted in a murky palette. On the other side were happier faces in vibrant, vivid colors. Some of the faces were almost clownish, reminding me of the joker with bright, grinning lips. My friend asked Tetsuo how he got his ideas and he said they came to him while painting or dreaming. Some of his faces are based on actual people he knows. It was a very relatable show that brought to life the positive and negative of the human psyche. A friend of Tetsuo noted that his work his leaning more toward happy these days. I also had a chance to see Lale, an amazing avante garde dancer perform. I’ve seen her belly dance before and was hooked! Unfortunately the pictures of the dancing was very blurry, but I do have some pictures of the artwork. 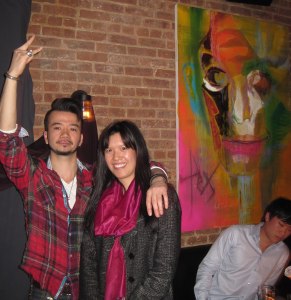 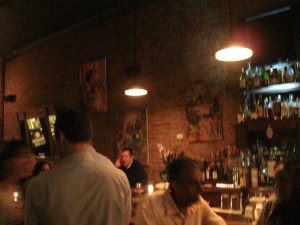