Not much will get me up before 6am in the morning, but when my friend Melodie invited to the Breakfast at Club 21 with André Leon Talley at 8am this morning, I jumped at the chance. After a delectable breakfast and plenty of coffee, about 150 of us were introduced to Mr. Talley.

Wearing a mustard-hued, custom made robe by Chado Ralph Rucci, André looked very much like a guru, fashion guru that is. Affectionately known as ALT in the blog world, he spoke to us in the intimate setting about the mix of high and low fashion, and what luxury meant for him. He recalled growing up under the influence of his grandmother, aunts, and uncles. Glamour was learned from his grandmother and Mr. Talley reminisced about her fantastic drawers brimming with elegant scarves and gloves. He mentioned his uncle who owned only 2 pairs of dress shoes that were polished to gleaming perfection. Sunday was a happy event for his family when they could dress beautifully to attend church and socialize. His early life had a profound effect on him and luxury to Andre means childhood memories of the scent of freshly laundered white sheets hanging from a clothesline.

After attending college at Brown, he worked for Diana Vreeland in New York. One of his first assignments involved macaroons (the hair style ala Princess Leia, not the pastry). He wanted to make the macaroons stand out and went shopping at Woolworth’s where he spotted hairnets (which reminded him of his grandmother) at a bargain price of 25 cents for 3. He thought that the macaroons wrapped in hairnets would cause the hair to sparkle in different lighting. Diana Vreeland loved it.

Finally in the Q & A session, I told him briefly about

RunwayPassport.com and asked him for advice for a new magazine. He said we had a great name which was a good start. As for advice, he could only tell us to follow our dreams.

Fashion in airports – is “sad” – He finds it humiliating to take off shoes at security checks. André said he dresses like a homeless person at the airport, because he doesn’t want people to recognize him (but of course they still do). The exception? If he were on a a plane with Karl Lagerfield, he would arrive overdressed because “some people have such high standards”. Apparently Karl Lagerfield wears those high collars even in the St. Tropez heat that would make us ordinary humans wilt. “Must take him hours to get dressed”, mused Mr. Talley.

Reality TV: André has never watched American Idol and thinks that reality TV shows are “brutal”. He hated to see people cry when he was judging America’s Next Top Model and said that he wished that reality shows were more uplifting instead of about rejection. And he was horrified by the “potty mouths” of ANTM contestants.

Worst Fashion Trend: Wearing jeans over underwear – “like your mama didn’t tell you how to keep your pants up”.

On Education: He stressed the value of education and being a well read person. Learning French helped him connect better to different designers. He mention Jackie O who could have conversations in a French and Spanish when on diplomatic trips with President Kennedy.

On his success: When someone asked him how he achieved his dreams, he said he has always been fearless and was never afraid to work hard (e.g. time spent as receptionist for Andy Warhol).

About First Ladies: Jackie O and Michele O are his favorites. 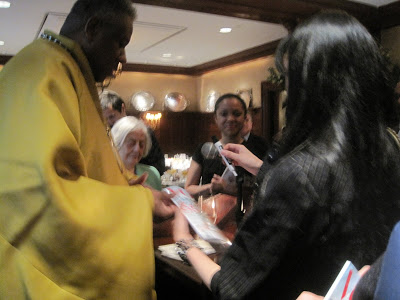