Skip to content
Imagine wearing an outfit that could be played around with to create different silhouettes.  That’s the concept behind many of the designs for the fall season of SHIN, a dramatic knitwear line based in NYC.  Designer Shinwon Yoon was nominated for the Gen Arts Styles International Fashion Designer award in 2008 and launched her line in 2009.  In just a few years, her sophisticated collection has been picked up by the cutting edge Oak NYC store. I love the layered and asymmetric looks of Shin and met up with Shin recently to talk about her background and exciting fall collection.

What’s your background?
I worked for an architectural firm for 3 years in Seoul, Korea.  Then I moved to New York and went to FIT for one year.  When I first graduated I interned at Zach Posen, and Three as Four and then I started my own line.

Why did you decide to go into fashion?
The reason why I wanted to work in Fashion after I quit being an architect is because I like to play with shapes.  When you work on a architecture project, it takes 4 or 5 years to see the results of your project.  I wanted something that communicates with the people better.  I wanted to work on something that after 2 or 3 months, you see people wearing it around and get feedback from them. That’s why I enjoy fashion better in a way. 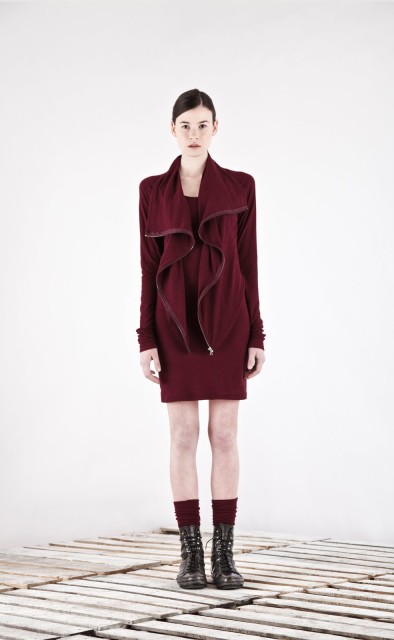 What is your influence for fall and has architectural background helped?
I don’t follow trends.   All the silhouettes have architectural influence together.  I’m always playing with the shape.

Any influences in general?
When I first started, my biggest influence was Yohji Yamamoto.  But now I try not to look at other designers.

What is your favorite piece from your line?
The Asymmetrical jacket, (style JOO2WK) in Italian wool because I think it reflects me the best.  I like to make clothes that people can change around and make a new shape out of it.  This one piece shows everything.  People can play with the silhouette.  The layers.  It gives them the option of creating a look.  It’s not about one piece wearing it one way one time.  You can wear it many ways.

Where do you want to be in the next few years?
I’d like to expand to a mens line.  I don’t know if it’s my architectural background but a lot of guys are interested in my designs.  Next season, I will be working with a photographer and using his photography and my paintings into my print.  We’re working on an art collaboration.  I don’t want to remain as a fashion designer.  It’s important to me to be successful in fashion and be a better business person.  At the same time I don’t want to be just a fashion brand.  I want to constantly be involved with art.  First season I did a lot of print and hand painting.  But 2nd and 3rd season, I focused more on shape.  Next season, I’m going to do  more of my specialty, painting.

Has your Asian background influenced you?
Yes, it has influenced me, especially a lot of the prints, and the way I draw.  I actually use Chinese ink.

Why did you come to New York to start your line?
In Korea, it’s a hard to start your own line and your own company.  That’s the main reason.  There isn’t really a market for independent designers.  It’s either a big company or someone that sells $10 t shirts.

What’s the most difficult and best part of having your own line?
Most difficult – The business side, getting sales and meeting people.  The best part – The creative part!

Who are your clothes for?
When I design my clothes, I think about myself and what I would wear.  But anyone who wants to wear my clothes, they can use my clothes as a medium to express themself.