Skip to content
It’s a rare event that will have me gladly wake up at 6am without pressing the snooze button.   But at 8am yesterday, I was at China 2000 Fine Art, eager to partake in the Asia Week New York‘s Press Walk.  Asia Week’s PR maven, Marilyn White led a group to preview some of the galleries participating in Asia Week New York, the annual collaboration of international Asian art specialists, major auction houses, museums and Asian cultural institutions.  We visited around 30 galleries in the span of 12 hours and had a fascinating, eye-opening and education experience.

At its fifth year, the Asia Week takes place in metropolitan New York with a diverse group of galleries showing antiques, traditional and contemporary artwork from Asia inluding China, Japan, Korea, Tibet, Vietnam, Myanmar, Cambodia, India, and is open to the public from March 15 – March 23, 2013.

Here are a few highlights of my day. 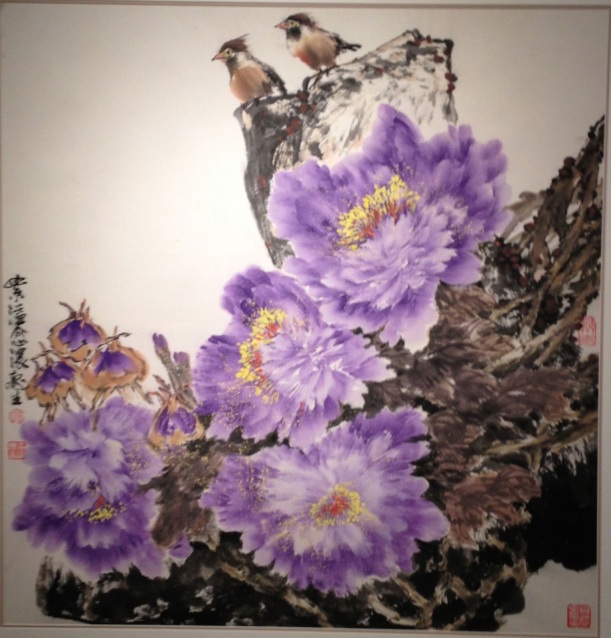 Orchids and Rocks painted by Prince Yi Ha-Ung when he was in his 80’s around 1900.    This notorious prince was politically ambitious but also renowned in Korea was his paintings of orchids.

A visit to Joan B. Mirviss to see “The Seven Sages of Ceramics: Modern Japanese Masters, is a not a mere visual delight.  This is a rare chance to experience the creations of the rockstars of the Japanese ceramic world, Arakawa Toyozô, Ishiguro Munemaro, Kamoda Shôji, Kawakita Handeishi, Kitaôji Rosanjin, Okabe Minueo, and Yagi Kazuo.   The twisted forms, asymmetric shapes, allow the eye and mind to wander and explore. Mirviss encourages guests to touch these masterpieces, which adds more wonder to this journey.

Sue specialises in Mughal and antique Gold Indian jewellery and antique gold articles from China and South East India.  Stunning pieces include a golden Turban Ornament set with diamonds and threaded with seed pearls and tumbled emeralds and a Chaupad set, which was a dice game set for Indian aristocracy.

Principal Martha Sutherland, who was educated at Princeton as an art historian and who speaks fluent Mandarin, is deep reservoir of knowledge about Chinese culture and contemporary art, and has longstanding relationships with many of today’s renowned Chinese artists.  This year’s exhibit includes works by different artists with varied backgrounds and using artistic mediums.

Hai Tao, who was born into a family of intellectuals in Nanjing, is a landscape painter, who epitomizes the scholar painter and who has won numerous awards in China.

Zhu Jinshi, from Beijing, who was a factory worker in the 1970, was influenced by Western abstract oil paintings and was trained in Berlin.  Mr. Zhu was part of the first influential avante-garde group of artists after the Cultural Revolution, the “Stars Group” (Xing Xing).

Zhu Dao Ping, a prolific and respected painter born in Zhejiang, China, is the current President of Nanjing Academy of Calligraphy and Painting.

Lesley Kehoe has a range of art work including lacquerware, jewelry made with washi or Japanese Mulberry and also Contemporary screen artist, Maio Motoko.

A13 fold screen of graduating panels. It is a both a painting and an object – a bewitchingly ambivalent form. You don’t completely partition a room, but rather capture the fleeting mood of a moment and enjoy the imperceptible sound of it vanishing.

We ended the evening at Scholten Japanese Art, which was fitting since the theme of Scholten’s exhibit is nightlife.  A highlight of the exhibit was small-format six-panel screen that depicts the famous female shrine dancer Izumo no Okuni who is credited with originating the kabuki theater (which later became restricted to male actors only) in Kyoto. Okuni created a hugely popular to to raise money for the temple.  The risque show, which was scandalous because of the cross dressing (Okuni dressed as a samurai) was soon imitated by female prostitutes and the government quickly banned women from performing kabuki.