Skip to content
Ishikawa Arts Now, a juried display of traditional and modern craft, art, and design products, organized by the Ishikawa Prefectural Government of Japan, held a reception and opening preview at the Japan Society on the evening of Feb 10th, 2014.  The display from Ishikawa Arts Now, runs through February 14th at the Japan Society (free admission), located at 333 E 47th St, New York, NY 10017.
In attendance were Koichiro Eno (Director of Ishikawa Prefecture Department, JETRO New York), Celebrity Chef Michael Romano (Ambassador of Culture and Fine Dining of Ishikawa Prefecture), Museum of Arts and Design curators David McFadden and Ron Labaco.
Opening Remarks were made by Mr. Eno and Mr. Jun Ishihara, Consul for the General Consulate of Japan in New York.  MAD’s Mr. McFadden spoke briefly about the 19 pieces that were selected by Mr. Labaco and Mr. McFadden.  He lauded the highly trained artists who fuse modern and traditional art, keeping the old crafts alive and new. 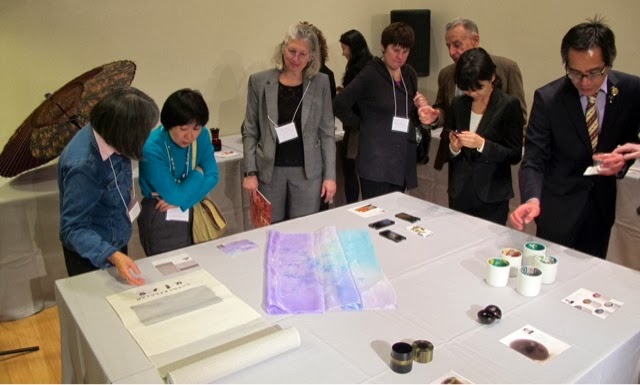 One of the artists, whose piece was selected for the juried display was artist Yuki Nakamura, who created “Universal Collection_24”, made a special appearance.

The artist traveled from Ishikawa prefecture for the event.  Yuki Nakamura’s ability to collect random bits of shell, wood, and bone fuse them together with sap-derived lacquer never results in anything less than magical.  Once the piece has been traditionally lacquered and polished, its organic lines reflect the flow of all living things.
You can shop select craft at theartofjapan.net or contact Alice Chin a.chin@theartoftravel.net.